Where I come from, we make jokes, for some absolutely unknown to me reason, with people from the Chukchi Peninsula located at 'the northeastern extremity of Asia.' One example is the following joke. A guy from the region goes on a trip to Africa, and when he comes back, the whole village gathers to hear his stories. Says he, 'I saw a giraffe!' but the people don't know what that is, so they ask. He replies, 'well, you know what a moose is, right? A giraffe is like a moose with a really long neck.' Everyone is amazed and asks what else he saw. 'I saw a zebra' - adding, due to the bewildered faces around - 'it's like a moose, but black and white.' They want to hear more, so he says, 'I also saw a crocodile.' He stops, thinks for a while how to describe this one, and says, 'well, you know what a moose is. Imagine something that has nothing in common!'

I think something similar commonly happens when we speak of quantum mechanical effects, especially when the wave-particle duality - the notion that quantum mechanical objects sometimes behave as waves and other times as particles - is invoked. The idea that stuff around us is ultimately made out of 'particles', in the sense of tiny balls of matter, is heavily ingrained in our worldview. For example, even though we know that the picture of an atom with the electrons orbiting as planets around the nucleus is wrong, it's what everyone imagines when thinking about atoms, and especially Big Bang Theory fans who see this at every cut-scene. There is this general peculiarity in the thinking about all small-scale physics, even when the thinking is done by physicists: we know that it is the wave function that rules the world on those scales, but we try to translate that world into something that's made out of particles, which just happen to have some weird properties. This inevitably and quickly results in statements of the form, 'a quanum mechanical particle is nothing like an ordinary particle in that...' We end up describing something not by defining its characteristics, but by outlining the characteristics by which it differs from something that we are very familiar with... just like the Chukchi peninsula guy in the joke. I find this equally absurd.

This is again due to the Copenhagen interpretation, and came about in the following way: Niels Bohr insisted on separating reality from the wave function; for him, reality was made out of observable objects, and the wave function was simply a tool to (probabilistically) predict how those behaved. It was important, however, to always discuss quantum physics in classically accessible terms, which is why he introduced the concept of complementarity, one manifestation of which is the wave-particle duality. In short, Bohr's view was, never mind the mathematics; that's not reality. Reality is anything that would come out in a measurement, and, in terms of that, the same quantum mechanical object sometimes has properties of a wave and sometimes has properties of a particle (in the sense that we are familiar with from classical physics).

My claim is that this has hindered the understanding of QM, rather than helped it, and that we need a revolution.

A good illustration comes from an experimental result which recently went viral in science-oriented social media. I will use this discussion of it to deconstruct the misconceptions, but I want to highlight that I am not trying to criticize neither the particular website nor the particular research group; the problem is much more fundamental, and this is just a handy, recent example. I encourage you to have a look at the article before continuing reading. It's a very sexy piece of news as far as developments in Physics are concerned, hence I'm not surprised by the attention it received. But, essentially, I have a problem with each of the first three sentences of the news article.

'Light behaves both as a particle and as a wave.' This is only within the Copenhagen interpretation, and in addition only within its very classical formulation. It is certainly what we all get taught in Physics classes, but anyone who has made one step further in thinking (or reading) about the philosophy of quantum mechanics might have questioned the statement. But, more importantly, the wave and particle behavior is essentially how some people choose to visualize quantum mechanical objects - it is not a scientific truth in any sense because it isn't even rigorously defined. There is no mathematical formulation of the principle; instead, it is used in 'hand-waving' explanations with the goal of providing some intuition. Occasionally, this works quite well, and I guess it was in particular helpful in the early days of the theory. I've just started feeling like we've outgrown it.

'Since the days of Einstein, scientists have been trying to directly observe both of these aspects of light at the same time.' They sure haven't. Or, [citation needed]. Physicists generally realize that the wave-particle duality is meant to help us visualize the behavior predicted by the wave function, but I had never heard anyone discussing capturing both aspects at the same time as an important experimental goal. Actually that 'goal' is, again, not even strictly defined. Which brings me to the next point.

'Now, scientists at EPFL have succeeded in capturing the first-ever snapshot of this dual behavior.' First of all, what does a 'snapshot' even mean, in this case? You probbly know that in order to take a photo, you always need some exposure time - the same is true here. I don't want to explain the details of the experiment - you can read the article and watch the video, I think it's fairly accessible. The bottom line is, however, that they had to average over many electrons interacting with many photons to capture the 'snapshot', so, even though everything is happening fast, is it really 'snap'?

Going with this train of thought, I have two questions to that statement: have they? And is it the first-ever? The answers cannot be both 'yes'. If this experiment counts as a snapshot of light as both a wave and a particle, then so should the following one, which is so old, fundamental, and pioneering, that it is by now a classroom experiment. I'm talking about the famous double-slit, which goes like this: you shine light towards a screen with two holes in it, and record the intensity at a certain distance behind.

It has been known already for centuries that the intensity presents an 'interference pattern' of alternating minima and maxima, since the waves coming from each slit add up in either a constructive or a destructive fashion. Now, if you decrease the intensity a lot, at some point what you start recording begins to look like discrete points on your screen - we would call those photons, or 'quanta' of light. The funny thing is that if you record many of them and average out, you would still get the same interference pattern, even though you were recording them one by one, as 'particles'.

The same experiment can be done with electrons, in which case it is supposedly more striking, because, supposedly, we are used to thinking of light as a wave and of electrons as particles. But, essentially, they are both quantum mechanical objects, so no wonder they behave in the same way! Anyway, the same thing happens also with electrons, and you can see a nice experimental result of the build-up of the interference pattern. So, doesn't this experiment also produce a 'snapshot of the dual behaviour?' I see no reason not to count it as one.

In fact, in the double slit, it is quite clear what the wave and what the particle aspects are. But have a look at the 'snapshot' from the recent experiment that I discussed above: I think an obvious thought is, 'I see the wave, but where is the particle?' That sort of confusion can for example be seen in most of the reddit comments on the article.  It's natural to not see the 'particle' if you're not a specialist, and it's difficult even for specialists, because the axes are not labelled in this photo. One of the axes represents position, but the other actually represents energy. What is demonstrated is, in fact, a wave-like interference pattern together with quantization of energy, something I explained here (the photo above looks quite similar to the guitar string vibrations, doesn't it?). In fact, if you look at the title of the actual research article (as opposed to titles in popular-science media), it says quantization, not particle. This is because the former is well-defined mathematically, while the latter is not.

The two experiments above do serve as a good illustration of the two properties that are most commonly associated with 'particles'. One, a particle is something which is well-localized in some finite region of space (double slit experiment), and two, it is something that comes in integer numbers - you can have one or two or three of 'em, but not one and a half (both experiments). But - think about it - both of those statements hold true for a moose as well! Is it an equally valid viewpoint, then, to imagine reality made out of tiny meese*, and talk about a wave-moose duality? I leave it to you to decide. 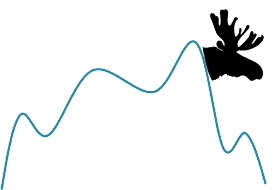 In short, the wave-particle duality is not rigorously defined, leads to a lot of confusion, and would be equally valid if it we replaced it with a wave-moose picture... Given all that, I say, to hell with duality! We must define objects by their properties, not by the properties by which they differ from objects that we are used to! There are alternatives. Several, in fact! If you are a fan of waves, the Everett interpretation is the way to go. If you really want to keep imagining particles, Bohmian mechanics would be your thing. I will explain both of those in due time, but first I'd like to finish with the basics of QM within the standard interpretation. In the second part of this post, I will thus give an alternative, which, like freetown Christiania, stays within the boundaries of Copenhagen, but goes against some of the accepted norms.

* It seems that 'moose' is the most standard plural of the word, but wiktionary says that, 'the form meese [...] will in most cases be greeted with a snicker, and is thus generally only appropriate in humorous contexts,' which suited perfectly my intentions.
Kozmo at 6:06 AM
Share