Rutherford did say something like this but suggesting a barmaid instead of a six-year-old, while Hilbert suggested the first man on the street. Technically, if we assume the statement correct, then nobody has understood anything about science, ever. But I'd like to have my go at explaining Physics-y stuff as simply as I can, and, perhaps equally importantly, without too much of the "woaaah quantum mechanics is so weird, you just have to accept it like this even though it's completely non-intuitive" crap one often finds in science articles written for the laymen.

I hope I've made it clear how within (my interpretation of) the Copenhagen interpretation one doesn't really need the notion of a 'particle'... Cause now I will go back to using the word 'particle' occasionally, in a very general sense. There are several reasons to do this. There certainly is a semantic one: quantum mechanics describes things like atoms and electrons and photons and so on, and we are used to calling those things by the generic name 'particles'. There's also the physical one, namely the fact that in observations the wave function sometimes shows particle-like properties, like a very well-defined position in space. But I think the semantic reason is stronger - I really don't want to go on writing 'a quantum object' instead of 'a particle' whenever I want to refer to what the wave function describes. However, I do urge you, whenever you see the word 'particle' and are dealing with QM, do not imagine a hard, solid ball shooting around through space: the wave function obviously has little to do with that. On the contrary, it is in many ways like a standard wave - like on the surface of a pond, for example - but has one additional property that ultimately leads to the whole particle/wave fiasco. Let me try to explain it, which in a way will help me put the 'quantum' into quantum mechanics. But before doing that, let's take a look at a guitar string.

The tone that a guitar string makes when pinned between two points is determined by, among other things, its length. More precisely, the length determines the wavelength of the possible vibrations of the string, which is inversely proportional to the frequency of vibration, which is what our ears register. Different wavelengths mean different frequencies mean different tones. 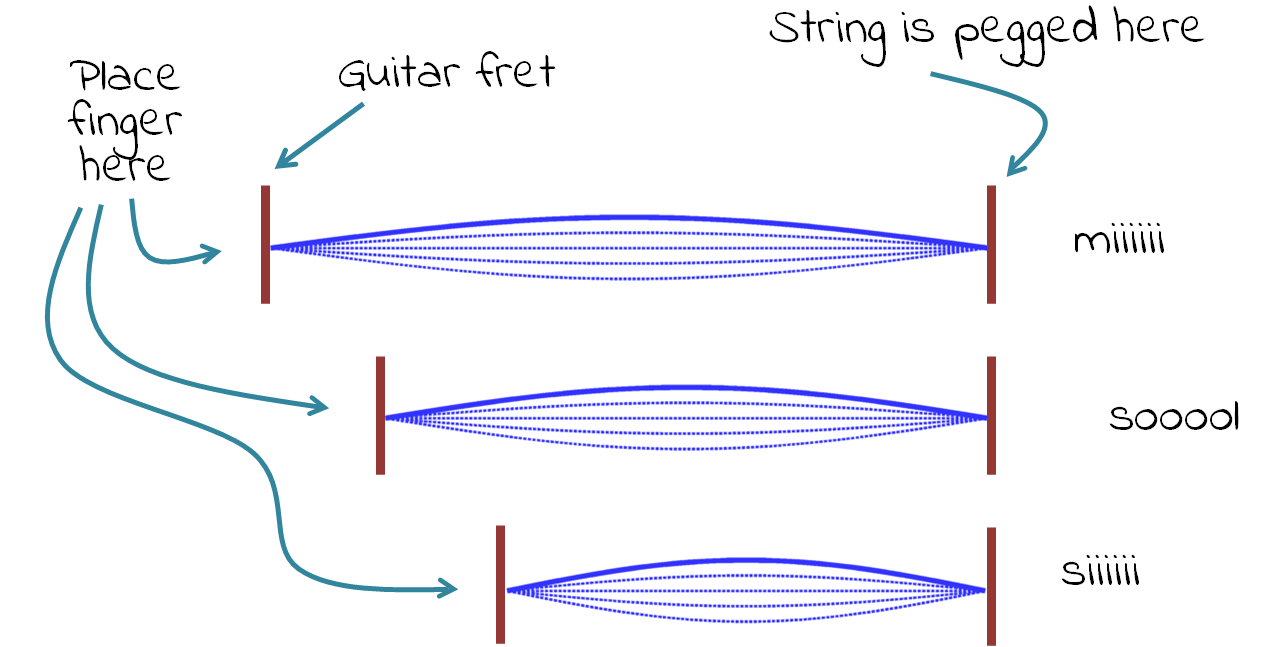 The ‘fundamental’ tone of the string is the one with the longest wavelength, and this is what mostly comes out when we pluck the string, although the other tones are generally also present, and are called 'overtones'.

By pressing on various frets, we make the fundamental wavelength shorter or longer, and produce various tones. So here is how the beginning of Stairway to Heaven goes, if played on one string (well, for the fifth row, which represents two notes played simultaneously, you'll need two identical strings). 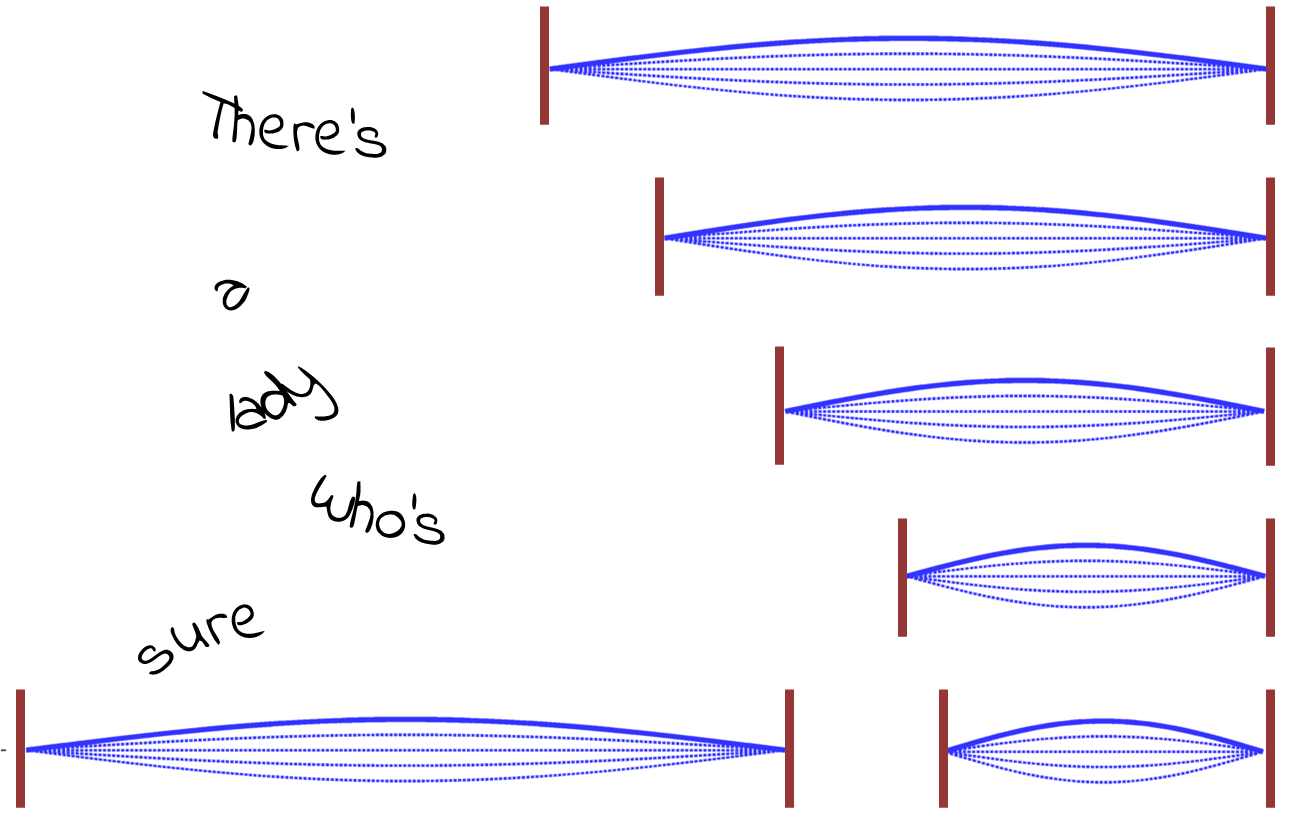 That's actually not at all relevant to my point but I thought it's cool enough to show. My point goes along the lines that any vibration of the string has an associated energy to it. For a given wavelength, the energy is also related to the amplitude of the vibration: the farther the string goes up and down, the more energy is present in its motion. Consequently, more energy is transferred to the air in the form of sound waves, and we hear the tone louder. So there is a continuous relationship between amplitude and energy:

One of the simplest QM systems to study is called the 'particle in a box', and is very similar to the guitar string. Assume the wave function can only be non-zero between two points in space, but in between those points it is free. This practically corresponds to 'trapping' a quantum particle inside a 'box'. What are the possible solutions to the Schroedinger equation? (i.e., what happens?) Well, it turns out that the allowed 'vibrations' of the wave function look exactly the same as the fundamental tone and the overtones of the guitar string.

But in the case of QM we don't call these 'tones': instead, we directly refer to them by their associated energies, which I've labelled in the figure. So far, the wave function looks like an ordinary wave (which is practically the reason why it's called like that in the first place), but here comes the fundamental difference: for every 'tone' of this 'quantum guitar', the amplitude is fixed! For example, there is exactly one energy E1 which is associated to the fundamental tone, and we cannot modify the amplitude of the vibration.

Here's why. The wave function defines a probability density, which stems from the fact that results of measurements can be (probabilistically) predicted by it. Thus, if we call the wave function Ψ(x), then |Ψ(x)|2 gives the probability of observing a particle at a given position, x. Now, probabilities must always have the following property: when you add them all up for all possible outcomes, the sum must be equal to one (i.e. 100%). This is practically the definition of 'all possible outcomes': if you try to measure the particle at any possible place, you are 100% sure to find it somewhere. This means that the wave function follows a pretty standard wave-like equation, similar to the ones we find in electromagnetism or fluid dynamics, but on top of that there's an extra condition – its absolute value squared has to 'integrate' to one.

This is what fixes the amplitude. In other words, then, one cannot modify the energy of the tone by 'plucking the string harder'. In fact, if we want to 'pluck' the wave function, that is, to add energy to it, we can only do that by adding exactly the right amount so that we excite a higher-energy overtone. If instead we try to give it an amount of energy which is 'not good', nothing will happen: the wave function cannot 'accept' that, because it cannot use it for anything! 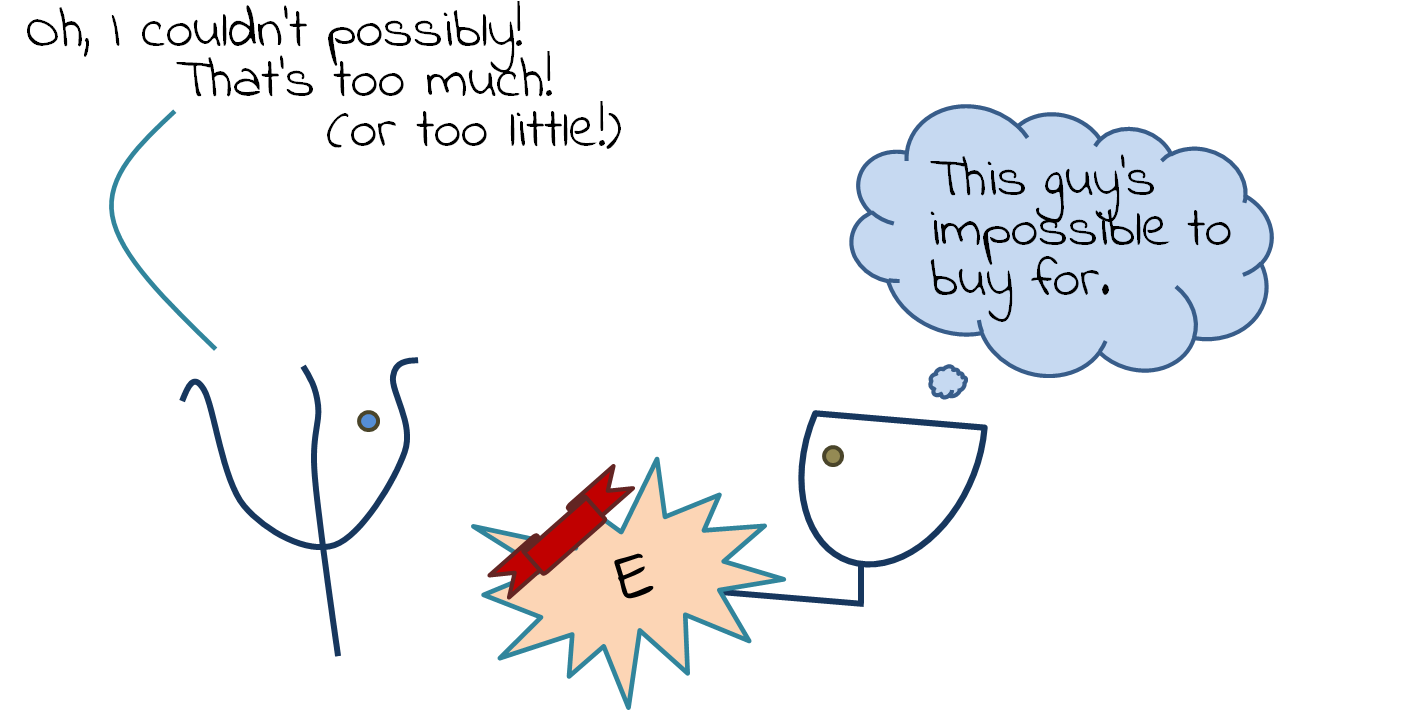 The fact that only discrete energies (physicists call them 'energy levels') are allowed is what is called 'energy quantization'. The word 'quantum' basically means a 'packet', or more precisely some quantity which cannot be divided into smaller quantities. The fact that energy comes in 'quanta' is one of the very fundamental properties of QM (hence the name!) - and is always the case for a finite quantum mechanical system (and one can argue that infinite ones are unphysical). By the way, the energy levels of the system, E1, E2, E3, etc. are sometimes called a 'ladder', which is the origin of the admittedly lame-ish pun in the title of this post.

So there you have it. If you've followed this far, you can brag around that you know what 'quantum' means. It has always struck me as quite funny that many people know a little about quantum mechanics, but very few non-physicists have any idea what the word 'quantum' actually refers to! Of course, I'm not claiming that I have given here a strict, exhaustive definition of the term - not at all, I just gave a simple illustration. But that's practically where the word came from in the first place: people saw that certain systems accept only some very well defined packets of energy, and called them quanta, and... that's it!

A catalog of all posts, with a small summary.